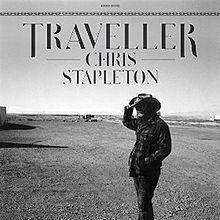 Traveller is the debut studio album by American country music singer Chris Stapleton. The album was produced by Dave Cobb and was released on May 5, 2015, through Mercury Nashville.

Described by critics as an old-school country record mixed with Southern rock, Traveller was named Album of the Year at the 2015 Country Music Association Award. Furthermore, it received two nominations at the 58th Grammy Awards: Album of the Year and Best Country Album. It reached number one on the Billboard 200 chart, and was later certified gold by the Recording Industry Association of America (RIAA), with sales exceeding 500,000.